The Hurt Locker vs Avatar

Many would be shocked to hear the news that Avatar was defeated by The Hurt Locker, as The Hurt Loccker won 6 BAFTA awards, when compared to that 2 BAFTA awards by Avatar. Check the link below to see the comparison. 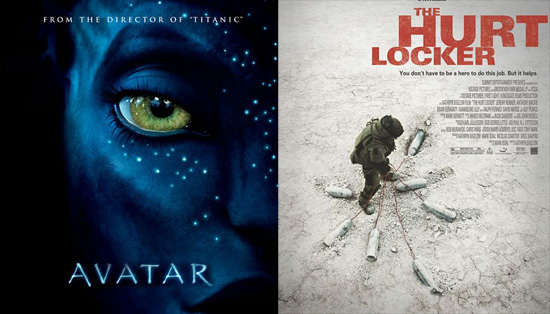 BAFTA awards by The Hurt Locker:

But the battle doesn't stop here because both the films are nominated under 9 categories for Oscar. Why "The Hurt Locker" is good

i) This film is about the story of the Bomb Squad team in Iraq.

ii) Due to securit issues, this film was short in Jordan.

iii) This film is directed by Kathryn Bigelow, who is the ex - wife of James Cameroon.

This film clearly showcases the sufferings of the USA bomb squad team in USA and also expresses their desire to save people, in spite of the danger they face. Thomson, the bomb squad leader, dies in a bomb blast, when he tries to deactivate the bomb.

He is replaced by James, and the rest of the story deals with how he proves that he was efficient in his job to save innocent lives from bomb blast. He nearly faces death, but wins the race all the time. At the end, his schedule was over and he returns to USA.

Later he was very much worried abou the continuouis bomb blast in Iraq, and finally he returns to Iraq and continues to serve for the people. A touching film indeed. You can check the list below to find the actual reason.

Why Hurt Locker deserves an Oscar

Hot Hits: 3604
Trying to be a good boy and also help others whenever possible.... should stick to my motto "Never Give up..... Life is beautiful... Enjoy the life"

Should the Politician whose name is in the data of "Swiss Bank" should be given Punishment ?

Search (88 Hits)
Top reasons for divorce: Part-2 (3501 Hits)
No married couple wants to end up getting divorced. It is not like they have planned for it. They try to put up with their partners for as long as they
How to improve digestive health (2420 Hits)
Due to our modern lifestyle, we feel that digestion related disorders are a common problem. Thus, we neither give importance to them nor seek any help