Hi friends I would like to share about an excellent movie called as “The Illusionist” which I saw yesterday (7th December 2009). Well, the genre of the movie is drama and the film is based on the subject of the Magician and his tricks involve. I have already seen a film called “The Prestige” and so this is also the same type of film, based on the magician background. The film is amazing and the credit must go to the director. Actually this film is based on the story "Eisenheim the Illusionist" written by Steven Millhauser, which explains the story of the 20th century Vienna Magician known as Eisenheim.

The film starts in a drama theatre, where Eisenheim performs his supernatural magic, by which he tries and also succeeds in bringing the dead spirit back and the audiences will interact with the dead spirit. The character of Eisenheim was played by Edward Norton and hats off to his performance and he truly looked like a magician. Hardly can we see any fight and this means there is a lot of conversation and more importantly the magic show by Eisenheim will definitely entertain us, as he really performs unbelievable magic, which is hard to believe.

So coming back to the story, when Eisenheim performs the supernatural magic, suddenly the police enter the theatre and they are ready to arrest him. This is really a strange beginning for the movie and everyone watching this movie will definitely be confused of what is happening, as I did. Walter Uhl is the chief inspector of the film and he is a very important character in this film, which might be seen as a negative character, but as the movie progresses, we can understand the true character of the chief police inspector Walter Uhl.

Then the narrator explains the flash back and also the story of Eisenheim. In his young age, Eisenheim saw a magician performing tricks, under a lonely tree. But to his surprise, after some time the magician and the tree suddenly disappeared and this incident made him to learn the tricks behind magic. As usual in every film, he also has a lover, but unfortunately for him she is very rich and her name is Sophie, the Duchess von Teschen( Played by Jessica Beil). They fall in love and as a result Eisenheim, presents her a locket, and this is not an ordinary locket and she needs to know the secret behind this, to open the locket.

This locket is more or less like a puzzle and once it is opened, she could see the photo of Eisenheim. But the girl’s family doesn’t like this and they prevent her from talking to Eisenheim. At last she decides and wants to stay with Eisenheim. But the girl’s family started to search them and at this time she believed that Eisenheim could use his magic, so that they can disappear. But unfortunately the magic doesn’t work and the girl was separated from Eisenheim and after that Eisenheim disappeared from that town, with a hope that he could go and learn about magic in China and other parts of Asia.

Then the flash comes 15 years later, where Eisenheim became a very famous magician and he was popularly called as the Master Illusionist. There he does an unbelievable magic, where she gets a kerchief from a women in audience asked her to keep the kerchief in a box. By this time he performs a really amazing magic, by which he drops seed in a pot and as he waves his hand that grows into an orange tree. And now he asked the lady to open the box and this time there is no kerchief in the box, and everyone was surprised to see that 2 butterflies carrying the kerchief.

Everyone was amused to see this and even the chief inspector Walter Uhl, who also attend the magic show, was amazed and he also tried to get the secret from Eisenheim. But he somehow managed to avoid him, from saying the secret and he also managed the situation by doing a slight trick, by finding and explaining in which hand the object was placed in. So everything was going well for Eisenheim and he became very popular and also earned lot of money, with the help of his shows. 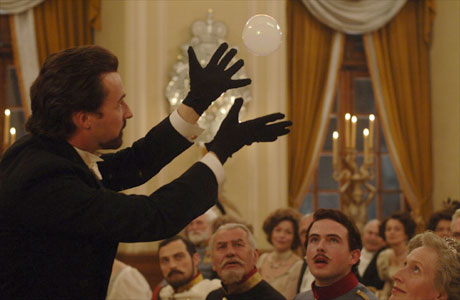 One day knowing about his popularity the prince Leopold, who is very cruel and also has plans to overthrow his father to become the empire of the kingdom, came to view the magic shows, along with his future wife, Sophie, the Duchess von Teschen. The show started and this time Eisenheim tries for an extremely threatening magic, for which he want a brave person to volunteer and come to the stage. The prince never believed in magic and he always hates Eisenheim and believes that everything is just a trick. He also wants to prove people that Eisenheim is a fake magician, who doesn’t have any real power, but performs only with some tricks.

So when Eisenheim asked for a volunteer the Prince stood up. Everybody thought that the Prince would volunteer. But this so called brave man, asked Sophie, the Duchess von Teschen to volunteer and go to the stage. At first instant Sophie, the Duchess von Teschen and Eisenheim never knew that they were the old childhood friends as they couldn’t recognize each other. But later Eisenheim managed to identify her and he controlled his emotions, as they were separated for 15 years, but never revealed who he was and expected that Sophie will recognize him. But as a matter of fact Sophie failed to recognize him and moreover Eisenheim was called as Eduard in his childhood and this is also another reason for her not to recognize him. But later Sophie managed to recognize Eisenheim and they fall in love. The Crown Prince invited and challenged Eisenheim to perform a magic, and during this Eisenheim gave a superb performance and this was a great humiliation for the Crown Prince as he couldn’t prove people that Eisenheim was a fake magician. So he ordered the Inspector to arrest him and later he also finds the relationship between Eisenheim and Sophie. He wanted to use Sophie to overthrow to his father and asks her to get ready to leave the town.

But on the other hand Sophie came to the Prince and this time she refused to come with the prince and this resulted in fight between them and as a result Sophie was killed by the Crown prince. Eisenheim was shocked to hear this and he knew that the Prince is the person behind this murder. At first, inspector produced another man for the murder charge, but Eisenheim opposed it as he believed that the real murder is Eisenheim.

So after that he decides to perform the Chinese traditional magic of bringing the death spirits back and while he was doing this he was arrested. Later he was released from the custody and inspite of the police compulsion to not perform the spiritual show, he decides to bring Sophie back and while he brings Sophie back with the help of magic, the police comes and when they were ready to arrest Eisenheim (this is the opening scene, where they didn’t show the arrest scene), Eisenheim fades and this was a surprise to all of them. Then the inspector finds the evidence that the Crown Prince was the murderer and in the difficult circumstances the Crown Prince shot himself and commits suicide.

But to everybody’s surprise the inspector accidently saw a man and this happens to be Eisenheim, in disguise. Then a little boy came to him and he gave a book, which explained the trick behind the Orange tree magic and now the inspector realized that every magic that Eisenheim did, had a superb trick. He also understands that Sophie didn’t die and everything was a preplanned one, to show a false report that the Crown Prince was the murderer. The inspector was very happy to know that Eisenheim and Sophie didn’t die. Then Eisenheim travels in a train and reach a lonely house, where Sophie is staying. The film ends positively and they again join together.

Hot Hits: 3131
Trying to be a good boy and also help others whenever possible.... should stick to my motto "Never Give up..... Life is beautiful... Enjoy the life"

Whom are you supporting this IPL4?

Search (62 Hits)
Top reasons for divorce: Part-2 (3453 Hits)
No married couple wants to end up getting divorced. It is not like they have planned for it. They try to put up with their partners for as long as they
How to improve digestive health (2403 Hits)
Due to our modern lifestyle, we feel that digestion related disorders are a common problem. Thus, we neither give importance to them nor seek any help

Simple remedies to naturally get rid of scars on face
Who doesn’t dream of a flawless skin which glows and offers that radiant look? Sometimes, scars ruin everything and leave a person disheartened. Scars
Simple ways to naturally lighten hair
We all wish to have lighter hair shades to project a whole new touch and appeal to our look. Especially during summer, we wish lighter shades. However,
How to start earning in early teenage
Teenagers likes  to spend money to fulfill their desires and their needs on buying smartphones, sports bike going for trips with friends or saving
Red Chili Hair Pack!!!
Hair loss is the great concern for many people now days and finding hard time to battle the hair loss problem. As most of us are aware that hair loss could
Benefits of Baby Massage
A soft touch is more powerful than thousand words. Therefore, it is very important for human being like food. We cannot see anybody in this world who never