The Simpsons - One of the popular TV animated Series

The Simpsons is one of the long running American animated comedy Tv serial. I really enjoy watching the series of The Simpsons. The series is shown in a satirical way which implies the truth of the today's world. Matt Groening is a creator and founder of the series. The Simpsons serial focuses on the family which includes Father (Homer Simpson), Mother (Marge Simpson), Older son (Bart Simpson), Middle girl (Lisa Simpson) and youngest daughter (Maggie Simpsons). This family lives in a small town in the United States called Springfield. 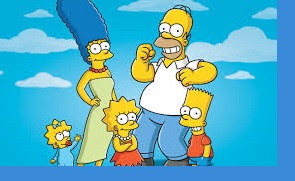 Originally, The Simpsons was released in 1989 and the series is still going on. Till now serial completed 27 seasons and approximately 596 episodes. I love all the characters of this serial, each character has its own uniqueness. Marge Simpson depicts the character of simple and decent housewife and a mother, who loves taking care of her family. Even though she has been shown as a simple lady but she has a capability to reciprocate herself when needed. Marge Simpson's character resembles very much like my mother. This fact makes me like this character more and more.

Homer Simpson, a nuclear plant employee, is a very funny character. He is been shown as a father of three kids, who is very carefree person. He likes eating food and drinking beer all the time and anytime. His carefree nature makes him vulnerable to all sort of hassles and damages. Even though he doesn't like taking responsibility he does take it at his best.

Bart, an intentional trot, older son who is a very mischievous kid, like to play pranks all the time. His school principal is always tired of his pranks. Even after punishing him he doesn't give up his behavior which makes Homer very angry. Bart's character resembles one of my younger cousin brother who had been bratty all his school time. However bratty Bart understand his limitations and what is the right thing to do. He follows his moms teachings and try to be nicer kid at the end.

Lisa is a precocious young girl. She is the smartest and most intelligent girl in the family. She enjoys playing saxophone. Being highly intellect she is always a loner and outcast by her friends in school. This fictitious character also resembles one of my sister who is very intelligent and with full of morals like Lisa.

Maggie Simpson, an infant and youngest child of the Simpsons family. Being infant she cannot speak and keeps sucking a pacifier. This character is less seen in the serial. However her presence has always made me think such a 'genius baby'.

Other than these fictitious characters there are several other characters in the serial, each one of them are unique in their sense and make the serial entertaining and more interesting.

Why the Simpsons is so successful?

There are several reasons for The Simpsons to be so successful. I think the credit goes to the creator of the show and the writer. Thoughtful humor and ability to depict the current event of life successfully makes the Simpsons more lovable among the audience.

Personally I love watching this serial anytime, I have been watching this for 7 years approximately. There are several reasons for liking this animated comedy. Firstly, most of the time it depicts the truth of today's world and gives very meaningful message at the end of the episode. Secondly this family seems to be like any other common man's family. It makes me feel as if they are speaking my mind. No harsh or violent words used hence makes it a very family oriented series. All characters feel very real. Whenever I watch this show I feel there is a Simpsons family somewhere near to me. Finally being a comedy serial it makes me laugh most of the time and also makes me think on the message they convey during the 30 minutes of episode.

I am sure there will be people who might be criticizing the show and the characters, especially Homer's character because he is shown as lousy, lazy, irrational and dumb person, who rarely does anything right in his life. No one likes this kind of character, but in real sense I think such character makes us laugh. I am sure if you guys watch this show you are going to like it, there are always exceptional though.

Top reasons for divorce: Part-2 (3047 Hits)
No married couple wants to end up getting divorced. It is not like they have planned for it. They try to put up with their partners for as long as they
How to improve digestive health (2160 Hits)
Due to our modern lifestyle, we feel that digestion related disorders are a common problem. Thus, we neither give importance to them nor seek any help
Top reasons for divorce: Part-1 (1734 Hits)
The bond of marriage brings the two people together. Initially, everything may seem okay and both of them slowly start discovering each other in the journey.