HOT SPOT - Now its not just cricket....lets call it " TechnoCricket!"

Hi friends in this article let us discuss about one of the important technology that is used and also produces 100% accuracy in finding whether a batsman is out or not...Ya this is the"Hotspot" technology.

Lets start from the past

When we consider the history of cricket, during the olden days they have never used cameras and people can't ables to see any matches.Then after 1950's cricket enters into the new era and Live telecast were also started, but still another drawback is that they don't use many cameras and naturally the run out and stumpings can't be detected with the help of cameras and all these decision has to be mad by the umpire and accuracy was not that much goo, but still the umpires did a good job to maintain a standard level without any technology.

Then, as the game developed, each and every match that were telecaste  live, which made the umpires job easier because for these live telecast on an average the broadcasting channel used around 13 to 16 cameras and this may be still high at present. So as a result many angles were covered and so "Third Umpires" were used most often in making the decision for run outs and stumpings. 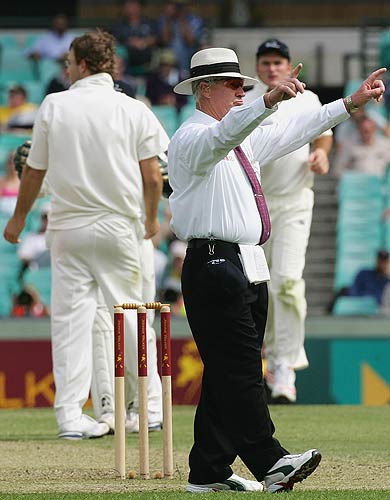 At present eventhough this hotspot was not officially used, many experts believe that it will be the future for making decisions for LBW(in case of detecting any inside edge) and caught behind(If the batsman nick the ball)

"A technology,which uses IR cameras, that dominates the umpire, in making  the decison 100 % accurate"

Hotspot is one of the most accepted and accurate technology which is used at present in most of the cricket matches.In spite of accuracy used in this technology , ICC hasn't made this technology to be used officially.Recently the master batsmen who is considered as the God of world cricket by fans,Sachin Tendulkar also gave a statement in favor of this technology.

The image above shows a white coloured mark on the bat which can be viewed only with the help of the Hotsopt technology, which uses the Infra Red cameras to detect it.From the above figure ,most of the cricket fans might have recognized this is the image of Sachin Tendulkar, we can clearly see how the batsman clearly connects the ball with the bat and from the friction produced when the ball strikes the bat, these hotspots are developed.The image above is just to show you haw the hot spot marks are used.The detailed explanation about this technology along with the practical examples are discussed later in this article

This technology can be used to finds

i)The correct LBW decision, so that any edge from the bat can be easily detected with the help of this technology.

ii)When it comes to any keeper catch even the slight edge or nick can also be detected with the help of  this technology.

In recent years of cricket one of the major problem in cricket is the umpire's decision and if this umpire's decision goes wrong in the case of any main batsman who is crucial for the team to win the match.This has happened many times and that too these LBW decisions. How this can be used in cricket?

Well this Hotspot technology is most often used in two important cases,

i)Caught behind- Did the batsman Nick the ball?

Well, the image below is good enough to explain the given situation.Well when we consider this in ordinary images or videos, we might feel that the batsman must have nick it and with the deviation produced, the umpire would have given out and as a result of that the batsman would be the unluckiest man.

But with the use of this technology we can help the batsman in knowing the truth that the ball had stuck the pad and not the bat, with the help of the white spot which is produced on the pad.

Another issue which can be discussed from the image from the viewers point is that the question of LBW, if the umpire had the idea of giving him LBW.And any cricket fan can easily guess with he help of this hot spot that the ball misses the off stump.And so this technology of hotspot made the job of umpire easier and in fact in future this can also be a danger for umpire, as they can replace them, which results in losing their job.

ii)LBW - inside edge or not? But this is given out most of the time LBW and the confusion arises when the umpires gives any batsman out out LBW without knowing that, there was an inside edge.So all these controversies can be overcome with the help of these hotspot technologies

Most often, the biggest mistake that the umpire commit is in these LBW decisions, and that too many batsmen where given out LBW, in spite of the inside edge and we should not blame umpires for this, be cause they are also humans ...."to err is human".........

So the main purpose why this technology was invented is to find whether the batsmen has edge it or the ball has struck directly on the pad.This determination is enough  to find whether a batsmen is out or not, in the case of caught behind and LBW decision.

Well the introduction of this technology is not an ordinary step, because earlier this technology was used in the military to by the tanks and also by the jets so that they could trace any of their enemies, and these were used particularly in countries like Australia.

But now this technology is used in every country and it was also accepted as the best technology as it gives the accurate decision, which was not in the case of Hawk Eye, which was used for LBW decision, and that too the hotsopt technology used for finding caught behind, in the case of any slight edge, and in the LBW decision,whether to find the ball has struck directly on the pad of it has any inside edge, are very accurate.

Know their technology - How Hot Spot is used?

i)The TV broadcasting channel who is involved in the Live telecasting of the matches, uses many cameas in the ground so that they could get the different angles.They must also spend money to use two infra red cameras on the ground.

ii)These two infra red cameras are used at the either side of the ground,i.e where they have the side screen, so that they could clearly have the view of the batsmen when he faces the ball.The reason why we need to use 2 cameras at the either side is that in cricket, after every over it is the keeper who changes the side and so after each over the bowler will bowl from different end.

After installing the cameras, the hot spot images can be used whenever any controversial decision was made and we can get the accurate decision with the help of these hot spot images and especially for the LBW and when the batsman snick the ball.Well, the working of this technology can be very easily understood.Whenever the batsmen is in contact with the ball,then the IR cameras which are set on the either side of the ground will send these images to the computer and in the next process all these images are converted into a negative image.

Now the IR cameras which are fixed on the either side has a great function, because they have the capability to sense and measure any heat produced due to the friction generated by a collision, which includes

i)Meeting of the ball to the bat

ii)When the ball strikes the pad or any other parts of the body.

So when these images are processed into negative images and in case if the ball has struck the pad, the we can see a white spot in those images, which are resulted due to the heat produced when the pad and ball meets.

In simple way we can express while consider two examples,

i)Whenever we slap a person, we are applying some force and then we strike them and at this instant the heat is produced due the friction that occurs between the face and hands and if we use the IR cameras we could easily detect this.

ii)Just set a camera and throw the ball on the wall and after that when you process the image, you could find a white spot which is developed on the wall, which is produced due to the friction produced between the wall and bat on that particular place.

I have watched a program called "Ghost Hunter", where the main goal fo that team,called as TAPS team, is to detect and find the exact location of the devil in the most haunted places.They use a lot of technology to detect these devils and one of the technology they use is called a the "Infra Red cameras".Usually it is said that these ghosts or souls, uses our body temperature and travel and with the help of these cameras they have also proved the presence of the ghost with the temperature differences.

The image below shows the IR image of a house taken with the help of IR cameras.

In fact these technologies was founded by French scientist Nicholas Bion,who worked in various companies in France and finally Nine Network, which is an Australian Broadcasting channel adopted this technology.

Hot Hits: 7075
Trying to be a good boy and also help others whenever possible.... should stick to my motto "Never Give up..... Life is beautiful... Enjoy the life"

What do you do when you bump into someone accidentally?

The streets beign crowded like sardine, it is bound to happen.

Search (103 Hits)
Top reasons for divorce: Part-2 (3517 Hits)
No married couple wants to end up getting divorced. It is not like they have planned for it. They try to put up with their partners for as long as they
How to improve digestive health (2427 Hits)
Due to our modern lifestyle, we feel that digestion related disorders are a common problem. Thus, we neither give importance to them nor seek any help

Indian Growth Story in Electronics Sector
The Growth Story of India Most of the developed world thinks that India is a backward country and you can find comments to such effect spread all over
7 Problems with Apple's Watch
It's been two weeks since Apple has announced their smart watch or simply - Watch, along with iPhone 6 and the release of iOS 8. Apple Watch is not yet
IT : New Dreams
New technologies in the dynamic arena of IT keep on certain flares in the media and on the net. It must have wondered how fast this growth engine is. But
How to Read Hindi Documents on Your Android Device
In Android, just like in Windows, if you want to view a document containing a non-Unicode font, the font must be installed in the system first. Now the
Theory of learning and mobile technology
Introduction:  The power of connectivity cannot be overstated if you use mobile phone for calls and text messages. If your mobile phone as sufficiently