The Message of Bhagavad Gita

Life is a fight, a continuous fight, and each one of us has to face some crisis many times. Gita starts with a crisis, an emotional crisis, faced by Arjuna, the representative of modern man, when he was challenged in front of the battle of life to kill his highly respected teachers, relatives and friends. About five thousand years ago there was a battle between Pandavas and Kauravas, two branches of family of the same dynasty, for an empire of our country. Pandavas, the five brothers were on one side with the support of their friend Sri Krishna, the divine incarnation; and the Kauravas under the powerful commandant of Duryodhana were on the other side. And the battlefield was Kurukshetra. In the opening scene of the battle, seeing his friends and relatives whom he had to fight with, Arjuna became nervous and he confessed Sri Krishna that he would not fight. At this crucial moment of Arjuna’s depression, began the famous Bhagavad Gita. And, millions of people all over the world have churned this ocean of knowledge and savoured the nectar of philosophy. 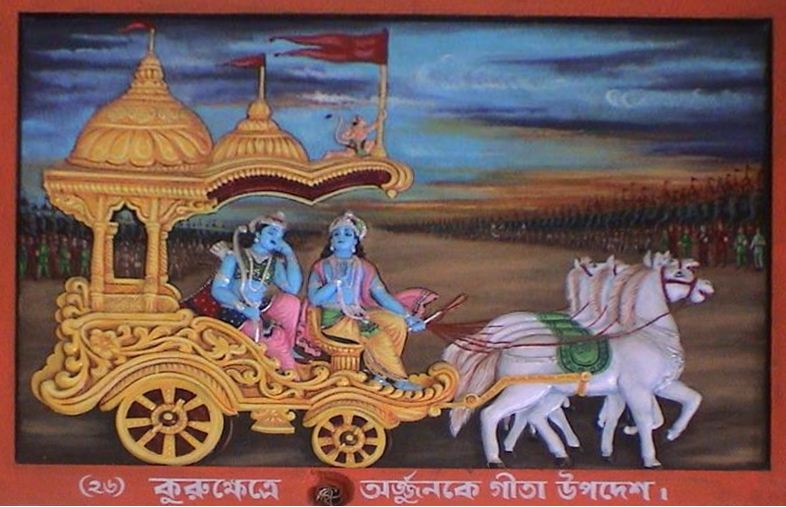 Gita is a part of the famous epic Mahabharata and hence it is assumed that Veda Vyasa was its author. There are 700 shlokas spread in 18 chapters, which are considered as the most beautiful philosophical poems the world has ever produced. Gita is a sacred book of noble thoughts that teaches us the philosophy of life. Gita deals with the practical aspects of life and teaches us how to perform our duties as a part of the community as well as the importance of practice of ethical values. The teachings of Gita grasp the roots of the problem and help us to transform from within. Change in thoughts result in change in actions. Gita reminds us that we should be enthusiastic in our activities and do our duties with a tranquil mind amidst the trouble and torrents of life. Gita is a great source of inspiration to all classes of people irrespective of caste, colour, religion or language.

Yoga, Jnana, Bhakti and Karma are the different paths of righteousness that lead to the same goal. In Gita we can see the harmony of all these four paths; the gems of all these four paths were collected and beautifully arranged in a single place, and the author of Gita declared like soliloquy that there were no more quarrel among them. Only the paths are different, but the goal is the same.

Arjuna was not willing to fight and kill his friends and relatives, whereas Sri Krishna was encouraging him to fight. So there is no surprise if we suspect that Gita is supporting war and violence.  War certainly implicates violence.  In Mahabharata, even though the Pandavas had the right, the Kauravas were not willing to give them a piece of land even sufficient to fix the point of a needle. When unrighteousness prevails, the only remedy is to prevent it and put the righteous people on the throne. Here, war was a necessity for establishing righteousness. The end justifies the means!

Another concept is that life is a battle field, a dharma-kshetra (field of righteousness) and kuru-kshetra (field of action). In this field of life, whatever we do produces its own results. There are no external enemies to be killed. They are the expressions of our inner state. We have to conquer our internal conflicts and delusions raised out of a notorious enemy known as ignorance. It is a battle against the enemies within, a battle continuously taking place between the good and evil tendencies of human nature.

Arise and Be Courageous

In this world of fast life, restlessness is one of the serious problems we encounter, leading to emotional conflicts and depression. With valuable guidelines, Gita tells us how to overcome stress and depression. Seeing his relatives, teachers and friends on the other side of the arena, Arjuna became nervous and depressed. He lost the steadiness of mind and was not even able to lift his bow and arrow. The chapter is aptly named as Arjuna Vishada (depression) yoga. Arjunas are everywhere in our society. At the most important moments of undertaking responsibilities, the situations make them weak and helpless and compel them to run away from life. There was a Sri Krishna there to advise Arjuna to face life with courage instead of running away from the realities of life, and we became fortunate to get this treasure of knowledge.

Sri Krishna says, “O Arjuna, Yield not to unmanliness. It is not worthy of you. Abandon this petty faint-heartedness, arise, O scorcher of foes!”(Gita - 2.3).

Fearlessness is the message that Gita delivers to us and it is the foundation on which Gita is built. We should control our emotions and face life with courage, rather than letting our emotions to control us. As Vivekananda said: “Be strong!....The sign of life is strength and growth. The sign of death is weakness. Whatever is weak, avoid! It is death. If it is strength, go down into hell and get hold of it! There is salvation only for the brave”.

Due to ignorance, Arjuna had a conflict regarding duty and emotion. At first, Arjuna tried to justify himself, but Sri Krishna guided him properly and Arjuna became eager to learn and requested Sri Krishna to teach him; and then started the real teachings of Gita. Sri Krishna taught him the yoga of Knowledge, about the deathless, birth less, and pure Self within, the eternal nature of human being. We should be aware about the eternal Self within every one and should not lose our motivation on account of temporary issues. Knowledge purifies everything and can be acquired by faith, practice and control of senses. Faith here is the motivational power, but not any conventional belief.

Sri Krishna says, “On earth there exists no purifier as great as Knowledge. In course of time, having reached perfection in Yoga, one realises that light of truth in one’s own Self” (Gita - 4.38).

Sri Krishna says, “He who having totally given up attachment to actions and their fruits, is always satisfied and independent, does nothing at all, even though he is full engaged in all kinds of actions.” (Gita - 4.20)

Gita teaches us that we should work with a steady and tranquil mind and do our duties more efficiently, without selfishness. It is the nature of our mind to distract, whenever it is engaged on some actions. But, we should we aware of what we are doing and do it without attachment; without thinking about the results of the actions. Work performed efficiently and lovingly, with detachment is equivalent to worship of God, and will lead to enlightenment.

Concentration is essential for better performance of all our daily activities. By regular practice of concentration and meditation we will enjoy supreme peace and pure joy. All greater accomplishments in life are achieved by meditative mind. Sri Krishna has compared the meditative mind of a yogi to that of a flame of a lamp that does not flicker, being protected from wind. Mind is always turbulent but by steady practice (abhyasa) and by showing no interest on unimportant things(vairagya) the mind can be brought under control. A person with uncontrolled mind cannot reach higher levels of concentration and character.

Peace and joy come from within. As per Gita, a person who has searched within and found this infinite source of bliss will be like this: “One whose happiness is within, who is active and rejoices within, and who is illumined by the inner light, that yogi alone is liberated in the Supreme, and ultimately attains absolute freedom.”(Gita - 5.24).

To achieve a joyful life one should control unnecessary desires and negative thoughts. Some people put their blame on fate for any mishappening in their life. Gita warns us that fate has nothing to do in our life, but we are responsible for what we are and we have the power to lift us to the top and drag down to the bottom.

Bhagavad Gita, literally meaning the Song of God, has come from the depth of the heart of God with a purpose - to enlighten the humanity! Gita contains an infinite source of inspiration for people of all fields of life and is relevant for all times. Gita teaches us great truths that will convert our life into a meaningful one filled with success and bliss. It proclaims to the world that Divinity is within every one and we can attain it if we are strong, courageous and determined.

Sri Krishna says, “Therefore, at all times constantly remember Me and fight. With mind and intellect dedicated to Me, you shall, without a doubt, attain to Me alone!” (Gita - 8.7).

Who is that ‘Me’ here? It is your own Self, the Omnipotent power within you; “the one that weapons cannot cut, fire cannot burn, water cannot wet or wind cannot dry!” Call it by any name…God, Bhagavan, or Absolute,…??... Attain it by any path.…Yoga, Knowledge, Bhakti or Karma…??...Be confident that you can attain that Supreme state in this very life itself!!…Yes, …It is possible, if you believe you can!!

which is the favorite fast food chain?

The Movie "Sajjan Singh Rangroot" will bring Alive Glory of Sikh Soldiers
The film "Dunkirk" hit the screen last year. It was immediately hailed as a tribute to the British Soldier and a faithful representation of a true incident
A Look at Vin Diesel's "Return of Xander Cage"
I was in Mumbai on the 14th January when the world premier of the movie "XXX: the Return of Xander Cage" took place. I was lucky to get a pass for
Sully: A review of the movie
Director:    Clint Eastwood Cast:          Tom Hank, Aaron Eckhart, Laura Linny  Rating:
Review of "Hard Target 2"
Cast:-Scott Adkin, Rhona Mitra, Robert Knepper Producer:- Chris Lowenstein  Rating:-Never watched this movie   You must have seen bad movies,
Why the likes of Kaakaa Muttai should be the norm in Tamil Cinema
A few years ago, Tamil Cinema was dishing out the worst movies in India.  There was absolutely no attempt made to show reality in any way,